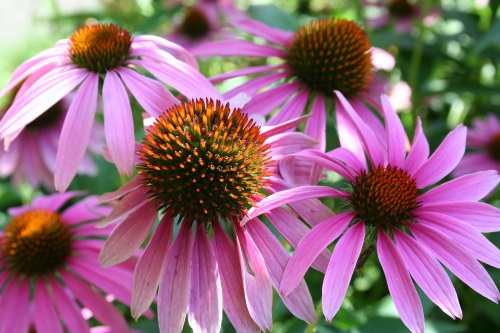 Its genus name ‘echinos’ means hedgehog in Greek, in reference to its prickly cone. Locally know as eastern purple coneflower, purple Kansas coneflower, red sunflower, Indian Head, purple coneflower, Black Sampson, comb flower, cock up hat, Missouri snakeroot and Sampson root, Echinacea was a panacea in the 18th and 19th century as antibiotics are in the 20th and 21st century. For 400 hundred years, various Native Americans tribes have been relying on this hardy and perennial herbs for herbal treatment, topical and orally.

This species is indigenous to eastern North America and has spread to the Southeastern and Midwest of United States.

Different tribes of Native Americans use echinacea to treat different ailments, but mostly for respiratory problems. The biochemical constituents of this herb range from anti-viral, anti-bacterial, anti-fungal and anti-microbial properties for defense system stimulation, which may help the body to fight off colds, flu and other infections. They also act as purifiers; cleansing the systems from pathogens which may reduce the chances of attacks or infections. The herb is also used to heal wounds, snake bites and treat skin problem such as acne and boils.

Anyone who is allergic to plants in the daisy family must avoid using echinacea. Individuals with asthma, allergies; atopic or otherwise may have an allergic reaction when taking the herb. Common reactions to echinacea include rashes, nausea, headache, constipation, epigastric pain and possibility of anaphylaxis. Individuals with autoimmune disorders are also advised to avoid using this herb to avoid aggravating the conditions. Pregnant or nursing mothers must also avoid the herb.